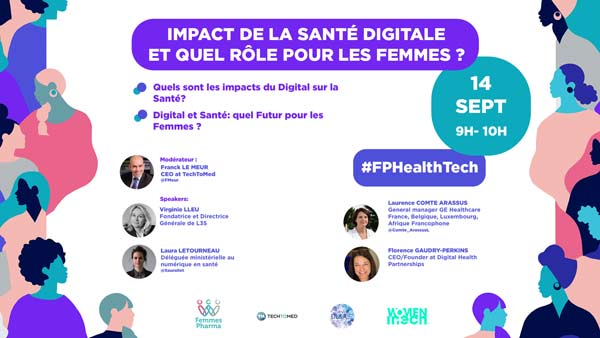 Impact of Digital Health and the Role of Women

Last Autumn, our founder Florence Gaudry-Perkins had the opportunity to participate in a roundtable organized by the association ‘Femmes Pharma’, which supports women’s professional development in the healthcare sector. The theme of the roundtable was "The impact of digital health and the role of women".

The phenomenal impact that the pandemic has had in the field of digital health was first discussed. As noted by Laurence Comte-Arassus, digital health now encompasses all age groups and populations. Global digital health investments doubled between 2019 and 2020, from $10.6 billion in 2019 to $21.6 billion in 2020. The use of digital health services exploded around the world, particularly in the field of telemedicine. In 2020 the use of digital services has, for example, not only increased in the UK (+912% of teleconsultations according to the NHS), but also in India (+500% of teleconsultations between March and May 2020), the United States (+2,000% of teleconsultations at Amwell between January and March 2020), China (+900% of Ping An Good Doctor uses in January 2020), and in many European countries. In France, Laura Létourneau explained, there has been a real shift to teleconsultation: remote consultations increased threefold among patients and fivefold among doctors, with an 80% satisfaction rate on both sides. These fundamental trends are now leading to the emergence of new professions specializing in both digital and healthcare, added Virginie Lleu.

Despite the urgency of the pandemic situation, only certain countries put in place adequate regulations to cope with the demand generated by the crisis. Even countries advanced in digital innovations have not necessarily created arrangements to reimburse telemedicine services. This is not the case for France, which can be set as an international example given two impressive investment plans contributing to the development of digital health: The Ségur numérique, a €2 billion plan for the construction of a public digital health platform, and the deployment of France Relance, which allocates €600 million for the training of health professionals, research and development, testing sites, etc.

Nevertheless, as we reach a decisive turning point in this field, some efforts remain to be made so France can involve itself in decisions being made at the international level (data exchange between countries, interoperability, etc.). In recent years, many global governance bodies have been set up in which France’s presence is largely absent. France’s presence on the international stage is not only warranted, but above all politically and economically strategic: it is in France’s interest to be immediately involved in discussions regarding the frameworks, rules, and standards that will define the global exchange of health data. This is the topic of a policy brief we recently wrote with the think tank Santé Mondiale 2030. Laura Létourneau explained that the Ministry’s international teams are being strengthened and that the French Presidency of the European Union (which began in January 2022) presents a great opportunity. However, France can go further by joining groups such as I-DAIR or Transform Health.

On the African continent, which Digital Health Partnerships substantially collaborates with, some countries are emerging as forerunners: Rwanda, a true land of innovation, has been putting in place an enabling framework to foster and encourage the acceleration of digital health for many years. Before France invested in a national digital health strategy, we had no hesitation to say that Rwanda was already ahead of the curve. For example, Rwanda permitted an American company that delivers blood bags by drone to develop locally, even though it was encountering hesitancy and regulatory barriers across the Atlantic. It is interesting to observe what is happening in countries such as Rwanda and to draw inspiration from them for the implementation of innovations in so-called "developed" countries (this is the concept of "reverse innovation"). At the national level, countries should also establish joint governance between the Ministry of Health and the Ministry of Telecommunications (such as is the case in Rwanda): this was one of the recommendations in the 2017 report of the  Broadband Commission for Sustainable Development, which stressed the importance of inter-ministerial cooperation but also the leadership of politicians, which is fundamental for this field.

Women in digital health: what role, what place?

While women’s place in digital health is still in its infancy, there are many glimmers of hope. In the healthcare sector, more women work in digital roles in Big Pharma companies than ever before, said Virginie Lleu. However, globally, it is noted that while 70% of healthcare providers are women, only 5% of them hold leadership positions! According to a 2020 Rocket Health report, only 40% of female founders of digital health companies said they raised required funds compared to 62% of men. There is some way to go, although there are great examples of women entrepreneurs in digital health to highlight, including those from Africa, e.g., Nneka Mobisson, founder of mDoc in Nigeria, and Juliana Rotich in Kenya, who created Ushahidi.

During the roundtable, efforts to diversify hires within respective organizations were highlighted – this is positive news! Each guest made a point of encouraging women to get involved in the digital health field. In the eyes of participants, women don’t need to copy the mindset of men to stand out and succeed, quite the opposite. The new generation of women entering digital health are supportive and ready to engage, and the health sector has a strong obligation to commit to women’s leadership development! Digital health contributes to increasing access to healthcare and to the reduction of inequalities. At Digital Health Partnerships, this is our raison d’être. We are committed to working with countries that lack the health infrastructure and health workforce required to improve access to care. Remember in sub-Saharan Africa, for example, there are roughly 2 doctors for every 10,000 people, compared to 49 in the European Union.

Our thanks to Femmes Pharma, Women in Tech, Digital Ladies and Techto Med for organizing this exciting roundtable, to the panelists and to Franck Le Meur for the rich and stimulating exchanges.